We would lie if we said that it comes as a total surprise, yet the finality of the following news is so damn sad: "Rocks", the biggest and most popular Rock and Metal club in Sweden's capital Stockholm and one of Neon Lights' favourite party venues, is closed down.

The final close-down was confirmed by Danne Ekholm, one of the DJs at "Rocks", on 26th June 2014 via his private facebook profile, saying amongst others that "Rocks" is "carried to the grave" and that "we tried but it was not enough".

Steve Conte (Michael Monroe band / ex New York Dolls) not only celebrates the release of his first official solo album "The Steve Conte NYC Album" on Tuesday (17th June 2014) at "The Bowery Electric" in New York. As it's now confirmed, he is also going to play his first solo show in Helsinki / Finland soon...

Reckless Love: "We are excited to announce our European Tour 2014!

Here are the dates and venues:

Yes, it's true: The masters of Death Glam from Sweden's capital Stockholm are going to invade Europe, the UK and Russia in March and April 2014! END_OF_DOCUMENT_TOKEN_TO_BE_REPLACED Read more →

In case you haven't heard of it yet, the Swedish Street Metallers Hardcore Superstar (Picture: Claudette Jarvis) had to make some changes to their tour schedule:

Formed in 2005, Baton Rogue Morgue are THE Heavy Metal heroes from Borgå [in Finnish: Porvoo] - but for a bouquet of flowers from their hometown, Lee Angel Morgue (Vocals), Domino De La Rogue (Guitar), Timothy Baton (Bass) and Danger Ranger (Drums) had to wait in vain so far. Possible reasons for that, why guitarist Francesco Gasoline Mattei has been replaced by Brymir's Joona Björkroth and why it's anything but easy for a rockband with English lyrics to succeed in Finland were one of many topics the Finns enlightened us about right before their first common show with Hardcore Superstar at "Klubi" in Finland's oldest city and former capital Åbo [in Finnish: Turku]. And since the supply of beer seemed to be already used up both at "Klubi" and in the impressive tourbus of Baton Rogue Morgue, we took a seat at "Lone Star", a Texas Barbecue restaurant right across the street... END_OF_DOCUMENT_TOKEN_TO_BE_REPLACED Read more →

Alice Cooper has told Billboard.com that he is "three-quarters of the way through" a covers album featuring songs that were originally written and recorded by The Doors, Jimi Hendrix, John Lennon and The Who, members of the so-called "Hollywood vampires" of the early and mid-'70s. A 2014 release is expected.

Sin 4 Sin return with "Through The Night" video

Sin 4 Sin have released a video for "Through The Night", the first single off their forthcoming album "Good 4 The Body" - set for release later this summer.

The video was produced by Joe Austin Films and was filmed over a series of shows in and around Baltimore in 2013 (The Ottobar 2/11, The Whiskey 4/6, and The Ottobar again for 98 Rock's Noise In The Basement hosted by Matt Davis) and a few rehearsals in between, all the while showcasing the strength of the Baltimore rock scene.

Austrian hard rockers Sergeant Steel will release their second album "Men On A Mission" on September 6th via Boyz Tyme Records. The band has posted a video clip for the album's first single "Cry Out Your Heart, Baby!", which is available for purchase at all digital download stores.

A new 12-minute video clip featuring behind-the-scenes footage from the studio can be seen below.

Through a cinematographic teaser Superhorrorfuck announced the change of line-up, and the release of the new album on Friday 13th, September 2013.

One of Neon Lights' favourite party venues, "Rocks" in Sweden's capital Stockholm, is getting renovated at the moment. New colours, more screens and even a stage is added as the first pictures from the new "Rocks" reveal. The re-opening is taking place this Friday (28th June 2013 / Address: Address: Mariatorget 1A, 118 48 Stockholm).

Video of the Week (3rd June)

Deathstars - All The Devil's Toys 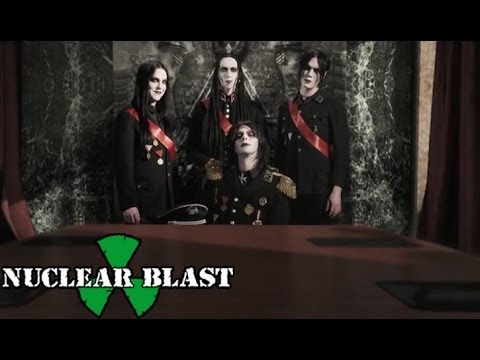